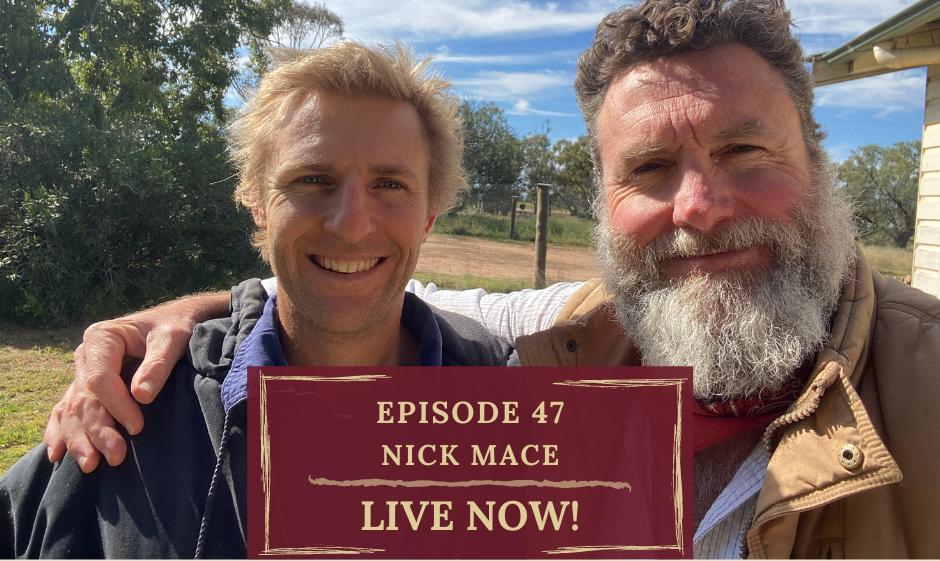 In this episode Charlie chats to Nick Mace. Nick  and his young family are currently transitioning their mixed enterprise farm in western NSW to more regenerative practices, primarily initiated by a health scare some years ago which has changed the way they engage with Nature, graze their livestock, steward their landscape and feed their children. A wonderful interview for anyone currently or wanting to start their own regenerative journey.

To join our Patreon community

– Patreon patrons receive exclusive access to webinars and transcripts + a range  of other perks in the making!

Grew up on Wilga Park near Walgett, NSW on a conventionally farmed family farm | Traditionally sheep country, and gradually has moved to mixed farming area over many years | Nick feels the country is better suited to trading stock more than breeding | Nick was educated at boarding school before a year at Legune Station on the Northern Territory/Western Australia border | Nick was completing a building apprenticeship in Sydney when a tragic accident in his family prompted his move back to the family farm | Cyndi O’Meara has been a great inspiration to Nick | It’s important to teach kids good habits when they are young | A serious health scare sent Nick on a new path of focusing on his own health which lead to a change of many practices in his paddocks | His father has always been open minded to trialing different methods of farming and his mother has always helped build the bridge through the transitioning period on the farm | Nick’s wife Alix, has created ‘The Rural Women’s Collective’ Facebook group which is ‘for rural women who want to optimize their health, wellness and business so they can thrive where they are.’ | Nick’s experimenting with a crimp roller on some of his pasture | Nick has different measures of success than he did when conventionally farming, one being ‘ less is more’ | He has changed his approach, working with his resources, and seeing weeds as a resource not a problem | He is currently transitioning his farm to organic certification and Biodynamics is now also a focus, as is biodiversity | Brent Burns of Landsave Organics has been an inspiration to Nick | Nick has considered constructing an exclusion fence around his property to keep out kangaroos, that can make a huge impact on pasture growth and availability of feed to his cattle and sheep | Nick is keen to give peppering a go to help control his kangaroos | Nick is a big fan of researching farming practices to justify his decisions | Nick is always learning from the challenges he has faced.

The Meter Man –  Brix meter : looking after your soil

Inside Outside Management – Brian Wehlburg founder