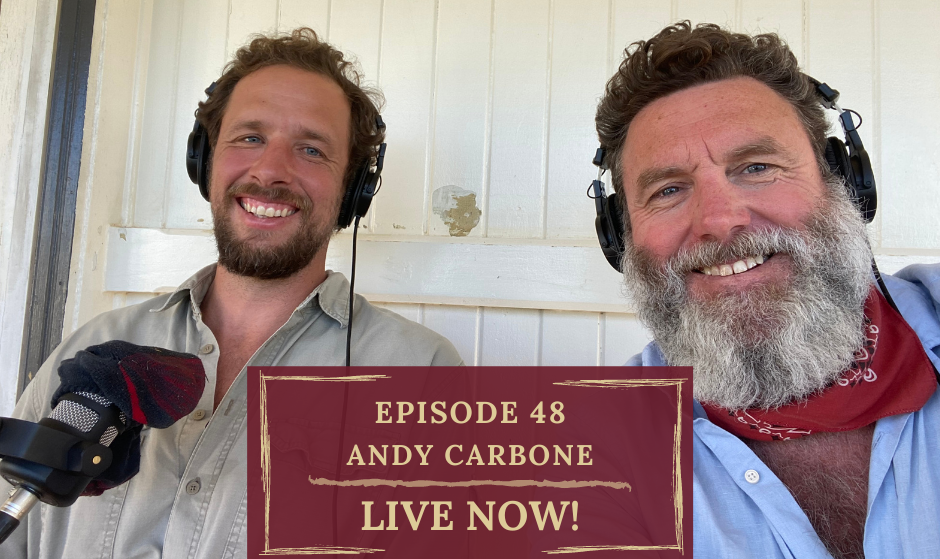 Charlie chats with Andy Carbone, General Manager of the Farm at Byron Bay in the latest episode. Andy Carbone started his life on a Central Queensland cattle station before trying his hand at acting, screen writing and film directing. A career and life change that stood him in good stead for a number of challenges that he would face on his own journey, which lead him to the world of regenerative farming.

To join our Patreon community

– Patreon patrons receive exclusive access to webinars and transcripts + a range  of other perks in the making!

Charlie met with Andy at The Farm at Byron Bay where Andy is the general manager | Education is a big piece of the offerings at The Farm | Andy’s ancestors settled in Central Qld in the mid 19th century and he grew up on a station there | His father was from an Italian farming family and his grandmother a bee-keeper there | His parents separated when he was young and he went away to boarding school in Brisbane | After school he spent time in the Channel Country in Queensland working a number of cattle stations | He then enrolled for a Fine arts degree in Acting In Brisbane with no prior experience | His father was in the film industry in the70-80s and dissuaded Andy from working in the industry. Andy wanted to prove to him that he could make it in that world. | Andy wrote and directed the film ‘Shooter’ film, filmed at Boorowa, NSW | The film was Andy’s contribution to the mental illness in regional areas conversation and issue | His father took his own life in 2020 | Charles Massy’s book ‘Call of Reed Warbler’ had a profound impact on Andy | Andy was managing farms in the Southern Highlands of NSW before his role at The Farm when he started to look into the practices of regenerative farming | Instinct and a strong connection to the landscape are important to Andy’s relationship with Nature | A Silent meditation retreat was a turning point for Andy in his personal development.

The farm at Byron Bay – Andy is the GM