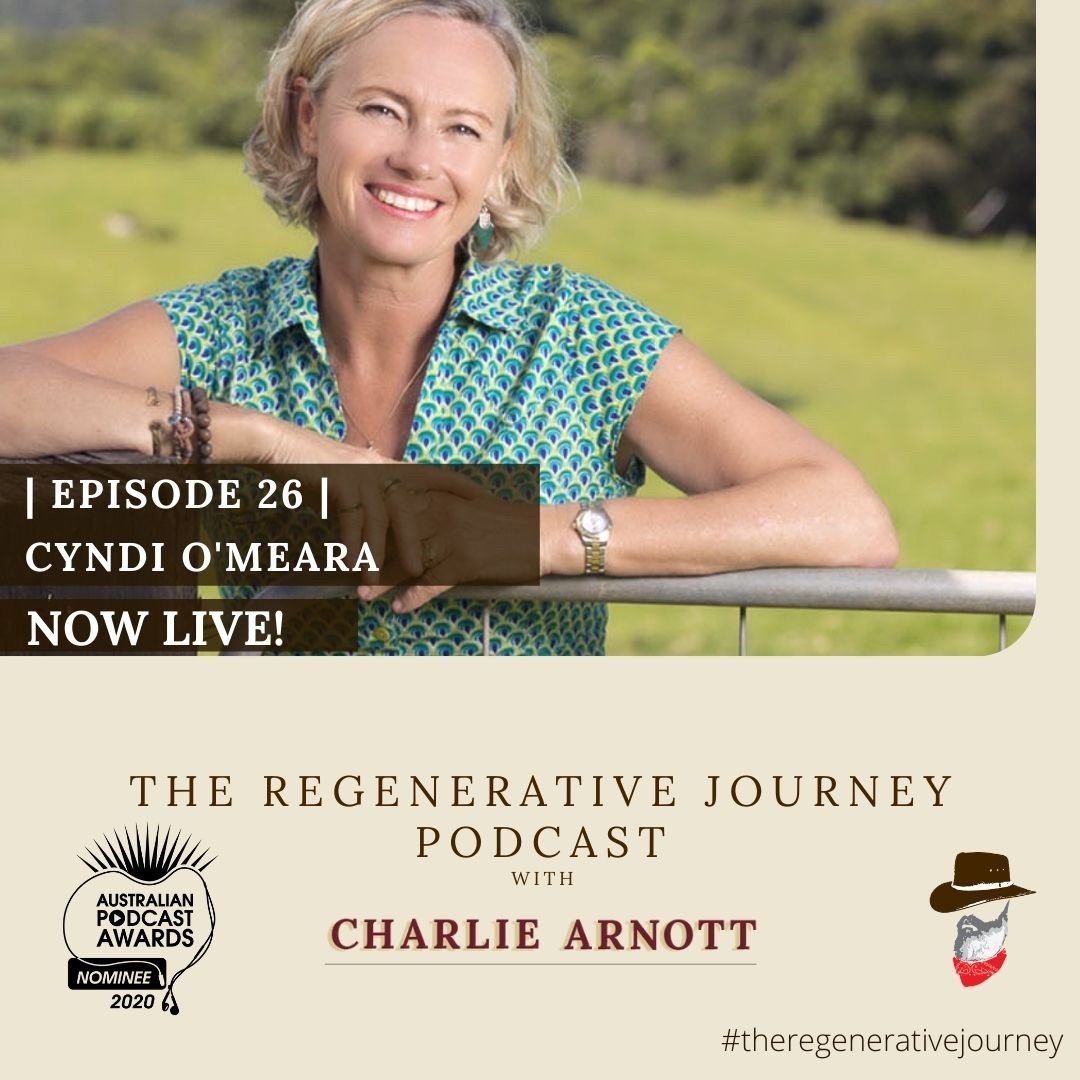 My guest for Episode 26 of the Regenerative Journey is Cyndi O’Meara. Cyndi has been an advocate for healthy food production and consumption for many years. Her training was inspired by the need to understand why humans have survived for millennia and now are in the middle of a global health crisis. Cyndi is outcomes driven and an advocate for food production and processing transparency. She is particularly critical of the use of Glyphosate in farming and its insidious infiltration throughout our environment and our bodies causing much of the current ill health and chronic disease seen in our populations today. Her Nutrition Academy offers people protocols and practices to renew and manage their health and wellbeing…

Cyndi had wanted a farm since a teenager, and to marry a farmer and have 12 children! | Her intention for buying her current farm was to help people get well using the farm as a retreat | She then decided that she didn’t want to put the capital into the farm to create this kind of business, and instead changed the vision to the grazing cattle, using permaculture and syntropic farming practices | Her grandfather was an organic corn farmer in the US in the 1950s and her mum was the oldest of 11, and a member of the largest haemophilic family in world | Cyndi’s other grandfather was a NZ organic farmer | Cyndi attended University of Colorado and studied about food and culture, to help answer the anthropological question of how did man survive? | She studied to be dietitian in Australia but this study didn’t align with the anthropology she had studied | Cyndi started writing for a local paper where she was able to express her thoughts, until her articles began to conflict with conventional thinking and commercial interests – these articles later became her book | She offers programs and protocols for food and health in her Nutrition Academy program |She calls out fake foods, GMO ‘food’ and advocates for food system transparency | Synthetic biology and genetic modification is used to produce a myriad of food and fibre products, with horrendous consequences when eaten, worn or when they ‘escape’ in to Nature | Food irradiation to sanitize food is a problem, killing biome and nutrient value, and is being used more often in Australia to ‘make food more safe’! | Health problem stem from problems in the paddock where food is grown, especially where glyphosate is used | The driver of human ill health is Big Ag, not the need to regenerate human health | Imprinting of diet when baby is in utero and the children will seek out that same food (and drugs) once born | Cyndi’s father was a pharmacist then chiropractor which meant he understood mechanism then moved to an understanding of vitalism | Dr Don Huber is a Glyphosate expert Cyndi has worked with. Glyphosate stops the critical shikimate pathway which is essential for amino acid metabolism and kills good microbes in soil and in our guts. It kills the good microbes that are needed to make essential amino acids | Chronic disease now everywhere can be attributed to the use of Glyphosate and other agriculture sprays such as arsenic, lead and DDT | In the1960s 4% of people had a chronic disease, now 38-40% of children have a chronic disease, for 65 years + and above the figure is 80% | Not just food important, lifestyle, mental state, exercise, following passion etc | Cyndi home schooled her children  | Currently incensed by the governments poor understanding human health  | If Cyndi was in government she would slowly remove all fake foods | Her genius is deciphering info and put it thru a vitality and a cultural history perspective  | Cyndi is outcomes focused, the outcome of creating well being in her client | Conversations of change often happen around the kitchen table sighting  an example of her friend who moved to an outback station and changed the food and cooking ethos of the men there with outstanding results | One of her inspirations is Dr Natasha Campbell Mcbride |  Better to put effort now in the kitchen than put the time into the docs waiting room later |

‘What the Bleep do we Know !’ – documentary

The Hidden Messages in Water –   book  by Masaru Emoto

Up for a Chat podcast – Changing Habits